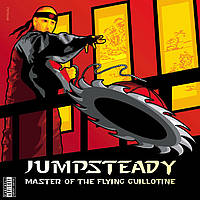 Born Robert Bruce, Jumpsteady (born August 9, 1970) is a rapper and wrestler from Michigan. He's served as one of the heads of Psychopathic Records from 1992 until 2007, when he retired from music to become a paramedic. He came out of retirement in 2012, and rejoined Psychopathic as an artist and vice president/co-owner of the label.

Jumpsteady is the older brother of Insane Clown Posse's Violent J. Jumpsteady fought in the Gulf War after joining the Army. Upon returning home, however, Jumpsteady became vocally critical of the war and the United States Government's actions in Desert Storm. However, even while stationed in Saudi Arabia, he was still able to aid his younger brother's career by suggesting that Violent J hire Jumpsteady's friend Alex Abbiss to be ICP's manager. Abbiss and ICP founded Psychopathic in 1991, and the rest was history. Jumpsteady also pushed for Psychopathic to sign Myzery, whose sister is Jumpsteady's wife.

1992 saw Jumpsteady's recorded debut as a rapper, performing on "Taste" off ICP's debut Carnival of Carnage. A solo EP, The Chaos Theory was announced in 1996, but was not completed and released until 2002. A full length album, Master of the Flying Guillotine came out in 2005.

As Evil Dead, he was the first JCW Heavyweight Champion.

"Master of the Flying Tropes":