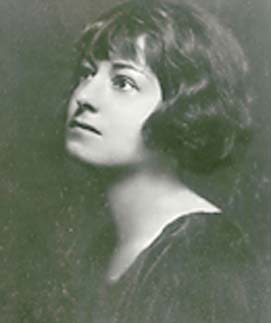 "That bird only sings when she's unhappy."
—Alexander Woollcott
"You can drag a horticulture, but you can't make her think."
— Dorothy Parker, after being asked to use "horticulture" in a sentence.
Advertisement:

Dorothy Parker (August 22, 1893 – June 7, 1967) was an American poet, critic, and satirist, known for her biting wit. Her written works specialized in cynicism related to love and romance, how they don't seem to work in practice as they do in idealistic works, and how even people who know this still want love and romance. Some of her shorter works are flat-out memorized in certain circles, and her influence remains in the Pop-Cultural Osmosis for tropes about non-ideal love.

She also collaborated with various people on occasional plays and screenplays, most often her husband, Alan Campbell (with whom she would have a quite tempestuous relationship until his death in 1963), sharing an Academy Award nomination for the screenplay of the original A Star Is Born. She also co-wrote the screenplay to the Alfred Hitchcock film Saboteur.

She's also famous for an alleged incident where she met President Calvin Coolidge, a notorious example of The Quiet One, at a party and told him "Mr. President, I just bet my friend that I could get you to say more than two words." Coolidge looked at her and said, "You lose." Parker would later get the last laugh, however: when Coolidge passed away, her immediate reaction to the news was "How can they tell?"

A staunch believer in left-wing politics and social justice causes, Parker's screenwriter career was effectively ended when her political views got her placed on The Hollywood Blacklist in 1950. While Parker had avoided ending up on the list during the 1940s, she had been a frequent outspoken critic of the House Committee on Un-American Activities for their persecution of suspected Communists throughout the decade, and she evidently knew that it was really only a matter of time before she would be picked as a target by them. The event ultimately didn't do anything to dissuade her from her activism and decidation to left-wing causes; in fact, following her death, her will bequeathed most of her fortune and entire estate to Martin Luther King Jr. despite never having met him in person.

Works by Dorothy Parker with pages: