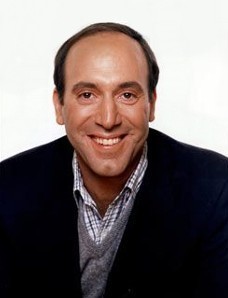 Eugene Kal Siskel (January 26, 1946 – February 20, 1999) was the film critic for the Chicago Tribune from 1969 until his death. Along with Roger Ebert, he was one-half of the weekly film review show Siskel & Ebert: At the Movies. The two of them rated films with a simple system: thumbs up or down, with a brief discussion of a film's strengths and/or weaknesses before presenting a verdict.

The show propelled both Siskel and Ebert to nationwide acclaim, including appearances on The Tonight Show, and made both two of the most influential voices in American film criticism (and thus arguably all cultural criticism in the late 20th/early 21st century).

Siskel died in 1999 of complications following surgery to remove a brain tumor. He'd announced a leave of absence from At the Movies two weeks prior. Ebert frequently referred to his friend and colleague in his essays until his own death in 2013.