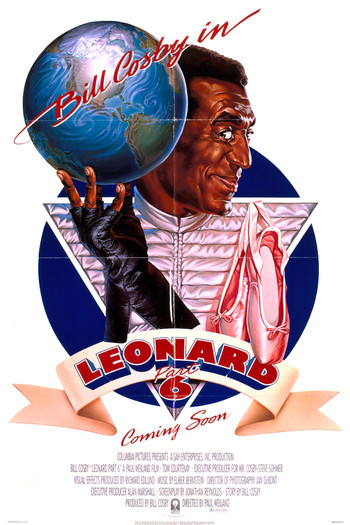 that the star himself told people not to see it. In his defense, Cosby was contractually obligated to promote the movie; said contract didn't specify how he could promote the movie, and so Cosby was abiding by his full legal rights when he appeared on every late night talk show warning people to stay away.

The story is ostensibly the sixth great adventure of top CIA agent Leonard Parker (Cosby), the others remaining classified for now. Leonard has gained a wide variety of eccentric skills over the years, and now that he has been brought out of retirement, to stop a plot by evil vegetarians who plan to train animals to kill people, he will have to use most all of them to save the day... and his relationships with his ex-wife and daughter, while he is at it.

There is no Leonard Part 1 through 5, if you were wondering; the title itself is a spoof of multi-part spy thrillers. And even if there were prequels, Cosby would have probably destroyed them all by now. Or traded them in for a lifetime supply of pudding and JELL-O.