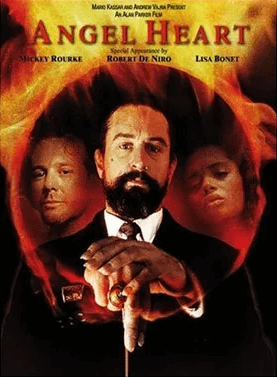 Harry Angel is searching for the truth... Pray he doesn't find it.
Advertisement:

For the manga and anime series of this name, see Angel Heart.

Set in the late 1950s, a private detective (Rourke) is hired by a mysterious client (De Niro) who seeks to find a man named Johnny Favorite. This search leads him to New Orleans, deep in the heart of its voodoo district. What starts off as a simple missing person's case soon escalates into multiple murders and the supernatural.

Upon release, the movie was controversial due to a sex scene with Lisa Bonet, which resulted in her being kicked off The Cosby Show. The scene had to be edited down for the film to get an R rating for its theatrical release; video releases restored the scene to its full length.

This movie depends on a massive Twist Ending, so a lot of the examples are spoiler-tagged. Highlight at your own risk.