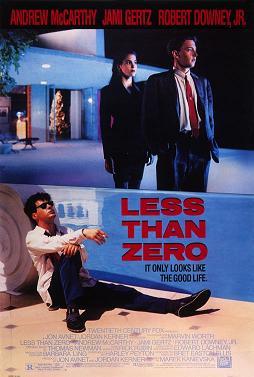 Less Than Zero is a 1987 film based on the book of the same name by Bret Easton Ellis, starring Andrew McCarthy as Clay, Jami Gertz as Blair, Robert Downey Jr. as Julian and James Spader as Rip, Julian's drug dealer.

The film was noted for taking extensive liberties with the plot of the novel. In a curiously Post Modern touch, the film adaptation actually exists within the universe of the Less Than Zero book: the opening of the book's sequel, Imperial Bedrooms, discusses the adaptation at length.