Film / A Letter to Three Wives 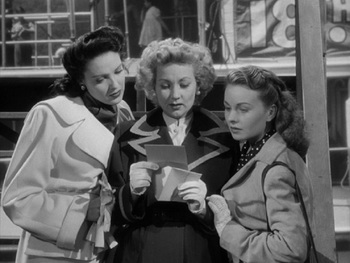 "It's a man's world. Yeah! See something you want, go after it and get it! That's nature. It's why we're made strong and women weak. Strong conquer and provide for the weak. That's what a man's for! Teach our kids that, there'd be more men!"
—Porter Hollingsway
Advertisement:

A 1949 drama film adapted from the novel Letter to Five Wives by John Klempner.

Three women — Lora Mae (Linda Darnell), Rita (Ann Sothern), and Deborah (Jeanne Crain) — receive a letter from a mutual friend stating that she's run off with one of their husbands. The thing that she's not telling is whose husband it is; she's letting them guess for themselves.

Won Academy Awards for Best Director and Best Screenplay (both for Joseph L. Mankiewicz), and was nominated for Best Picture. Kirk Douglas, relatively early in his film career, has a supporting role as Rita's husband, while Thelma Ritter appears as their maid.