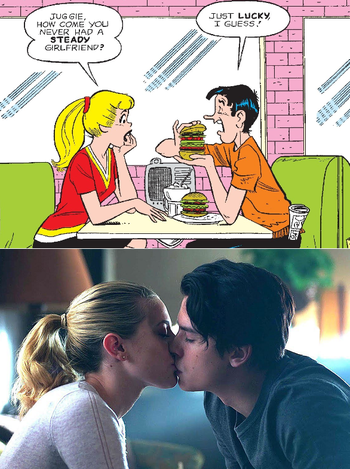 "Victor Hugo always intended for Esmeralda and Quasimodo to get married at the end of the book. He just didn't have the technology to write it back then."
— Phelous, reviewing The Hunchback of Notre Dame (Golden Films)
Advertisement:

So, you're adapting this great book, TV show or comic for the big screen. It's got action, comedy, drama, rom... what, it doesn't have romance? Well, that won't do; we can't break the formula. Looks like it's time for a previously platonic character to be Promoted to Love Interest.

The idea is that in order to appeal to a broad audience, we need romantic subplots. The original work (usually not film, because that's where executives have a field day) may have survived all on its own without a romance subplot. However, studios think that every story needs romance.

This sort of thing happens to everyone all the time in fanfiction, for some reason.

The convention is not an inherently negative one, but when done poorly, this may become a Token Romance or even a Romantic Plot Tumor in the worst cases.

Although normally reserved to adaptations in traditional media, interactive media that feature Romance Sidequests can also fall under this, if a character whom the Player Character cannot woo in one game gets a Romance Arc of their own in a sequel.

See also Hotter and Sexier. Compare Relationship Compression, where the romance is present in the original but significantly altered due to the different constraints of the new medium.