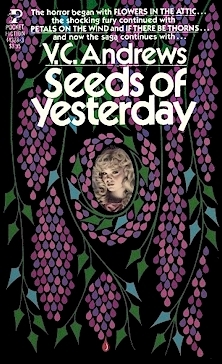 The final, haunting novel in the extraordinary story that has enthralled millions!note Cover of the first US edition, stepback by Paula Joseph
There was always a catch in every lure offered, whispered my ever-suspicious mind. I felt the lure now, reaching out to ensnare us again. Had Chris and I traveled such a long road only to come full circle, back to the beginning?
—Cathy
Advertisement:

Seeds of Yesterday by V. C. Andrews, published in 1984, is the fourth and final booknote (unless you count the ghostwritten prequel Garden of Shadows—and fans don't) in the Dollanganger Series. The book follows the continuing story of Cathy Dollanganger Sheffield, her husband/brother Chris, and her children.

Bart, now a successful businessman in his own right, stands posed to inherit the vast Foxworth fortune on his 25th birthday. His first act is to rebuild Foxworth Hall in all its glory, and Cathy and Chris (now in their mid-fifties), their teenage daughter Cindy, Cathy's son Jory, and Jory's beautiful bride Melodie, arrive for an extended visit to the newly restored mansion. The house brings back painful memories for Cathy and Chris, who vow to stay only until Bart's birthday, after which they will spend the rest of their lives in Hawaii, basking in the sun that was once denied to them.

But after a tragic accident, they find themselves staying on and on as jealousy, greed, and sibling rivalry threaten to tear the family apart. It seems that Foxworth Hall is bent on snaring them in its sinister web until they are again trapped in its walls, just as they were as children, until Cathy realizes that the only way to end the cycle is by healing her children's hearts and bringing love and light into Foxworth Hall again.

For the 2015 Lifetime Movie of the Week see Seeds of Yesterday.