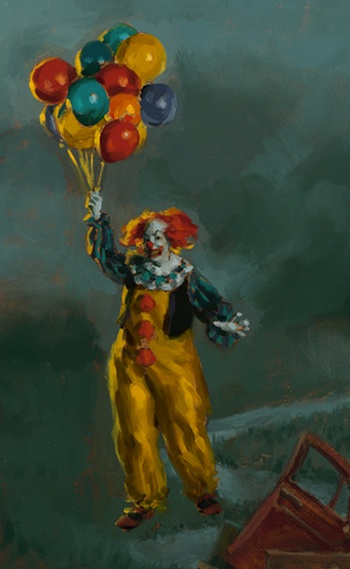 "Want a balloon? They float. They ALL float..."
"The terror, which would not end for another twenty-eight years — if it ever did end — began, so far as I know or can tell, with a boat made from a sheet of newspaper floating down a gutter swollen with rain."
— Opening line
Advertisement:

It is a 1986 horror novel by American author Stephen King. The story is about seven children being terrorized by a malevolent, primordial monster — known only as It — that shapeshifts to take the form of their deepest fears, but primarily appears in the guise of "Pennywise the Dancing Clown". The novel features a nonlinear narrative which alternates between two different time periods (1958 and 1985) and shifts among the different perspectives and stories of its seven protagonists. It deals with themes which would eventually become King staples: the power of memory, childhood trauma and the ugliness lurking behind a small-town façade.

One of the most popular of Stephen King’s novels and widely regarded as a horror classic, It is also one of the darkest and most frightening, its subject matter being a child-killing supernatural monster with Adults Are Useless in effect for at least half the story. And yet weirdly enough, there are some really uplifting moments. Along with The Stand it is one of the stories that cemented King's reputation as the premier modern horror writer, and like The Stand, it is one of the few examples of an epic horror novel in literature at over a thousand pages.

In 1990, the novel was loosely adapted into a television movie featuring Tim Curry in the title role. See its page for that. In 2009, Warner Bros. (who owned Lorimar when the original TV adaption was made, but was folded into Warner Bros. TV in 1993) announced that a theatrical remake of It was being planned, with Dan Lin, Roy Lee and Doug Davison tabbed to produce. However, the project spent some time in Development Hell until Andrés Muschietti, director of Mama, was attached and production began in summer 2016, with Bill Skarsgård as Pennywise. The story was split in two chapters — the first was released in 2017 (27 years after the 1990 adaptation, funnily enough) and the second was released in 2019.

Not to be confused with the 1927 silent film of the same name, which introduced the phrase "It Girl" to the world. Or 1958's It! The Terror from Beyond Space. Or the debut album by Pulp. Or the Big Bad of A Wrinkle in Time. Or the Psammead of Five Children and It. Or Cousin Itt. Or "It", the deadliest STD ever. Or the guys down in the sub-basement who (we hope) run the TV Tropes Server. Or the pronoun.

In a parody of the drain scene of Stephen King's "It". Creepy Clown Mischief gives the boy his boat back and recommend getting a tetanus shot.

In a parody of the drain scene of Stephen King's "It". Creepy Clown Mischief gives the boy his boat back and recommend getting a tetanus shot.