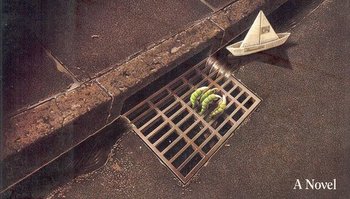 "What he saw destroyed his sanity in one clawing stroke."

Ah, It. Regarded as one of Stephen King's scariest (and longest) novels, it sure does have a lot of Nightmare Fuel. Now, where are my brown pants?

Then it was adapted into a movie, and untold numbers of children suddenly were scared of clowns. Good reason, too.

And now it's been adapted into new films (this time in cinemas), which have their own nightmare fuel pages.

Down here, we all float. And when you're down here you'll float too.