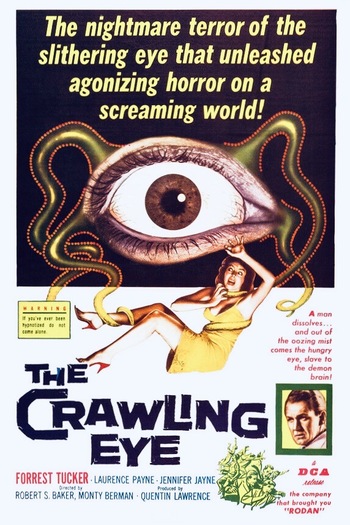 The Crawling Eye is a 1958 British Sci-Fi Horror film directed by Quentin Lawrence, starring Forrest Tucker, Laurence Payne, Jennifer Jayne, and Janet Munro. It was adapted by screenwriter Jimmy Sangster from the 1956–57 ITV serial The Trollenberg Terror, and was originally released in the UK under that title.

At the remote Alpine Swiss village of Trollenberg, someone or something is killing off mountain climbers. The culprits turn out to be an army of enormous, one-eyed, tentacled creatures from outer space, who hide themselves in a radioactive cloud. Crawling along like snails, these horrific beasts attempt to neutralize their human foes by pumping a freezing fog at them. And it helps matters not at all that some of the locals have been mentally enslaved by the monsters. It's up to American scientist Alan Brooks (Tucker) to save the day.

Stephen King considered this one of the scariest of the many horror movies he saw as a kid, and the climax of It features the eye monsters, while The Mist has a very similiar premise to this movie. It was also a big part of the inspiration for John Carpenter's The Fog (1980).

Also notable as the featured movie in the first Comedy Central episode of Mystery Science Theater 3000 (for that version please visit the episode recap page.) Nonetheless, it's a pretty good movie.

If you feel you've seen the poster art before in a different context, that's probably because the movie The Eye Creatures shamelessly reused the art for its own poster despite its creatures looking completely different.

Not related to the 2013 freeware RPG Maker game The God of Crawling Eyes.