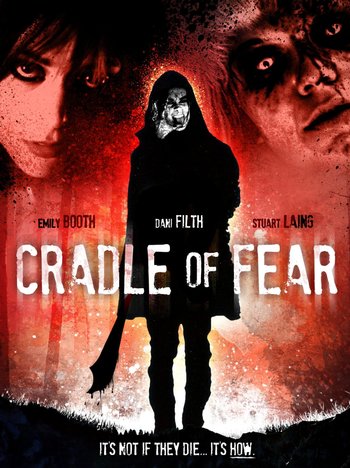 Cradle of Fear is a 2001 British horror film, directed by Alex Chandon. It was released direct-to-video on 4 July 2001. Taking inspiration from the anthology films produced by Amicus Productions in the 1970s, it features three separate half-hour segments, linked by a fourth story. The main narrative involves imprisoned serial killer Kemper wreaking vengeance on those responsible for his capture. This he does through his son: Dani Filth playing an unnamed character referred to in the credits as "The Man".

In London, Detective Pete Neilson is investigating several bloody and gruesome murders with all the victims connected to the trial of the serial killer Kemper who is interned in the Fenham Asylum. Melissa has one night stand with a sick man she met in a Gothic club and while going to the house her friend Natalie on the next morning, she has the sensation that she is surrounded by demons. Sooner she finds that she carries an offspring of the man. Emma and Sophie go to the house of an old man to steal his money, but their robbery becomes violent when the dweller wakes up. Nick has a guilt complex with his beloved girlfriend Nikki because his leg was amputated in an accident. He becomes deranged, gets a leg and forces his doctor to implant it, with tragic results. Richard Neilson, the son of Detective Neilson, works as a journalist and becomes obsessed with snuff movies in a website, where the user can select the means of killing the victim, losing his job. When the site vanishes, Richard seeks information finding the truth about the movies.