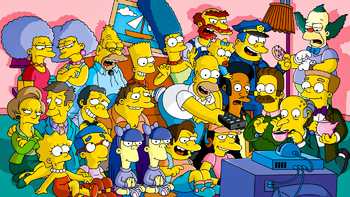 That's some casting couch. And this isn't even all of them.
"Everybody, get in here!"
— Phil Ken Sebben, Harvey Birdman, Attorney at Law
Advertisement:

A gag which calls attention to the fact that a show has large cast. In response to some summons, event, or strange series of coincidences, the show's entire cast winds up in a single shot, often cramped into an enclosed space. Phonebooths were an early version, followed by elevators, but most modern shows put their own spin on this. The humorous absurdity of such a situation is augmented by the viewer's sudden realization that he recognizes everyone, or the characters trying to fit everyone into a small, small, SMALL setting.

Bob and Louise sings "Bad Stuff Happens in the Bathroom", but now featuring everyone they know.

Alternative Title(s): Gather The Huge Cast, Everyone Get In Here

Bob and Louise sings "Bad Stuff Happens in the Bathroom", but now featuring everyone they know.