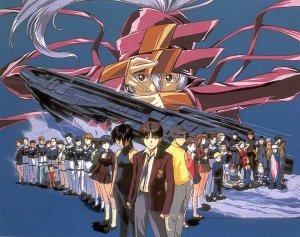 "I don't want to die. I want to live."
Advertisement:

Infinite Ryvius (Mugen no Rivaiasu) is an anime series set in the year 2225 AD. A Negative Space Wedgie called the "Geduld Phenomenon" has created a sea of plasma stretching across the solar system in-line with the orbital plane of the planets, and the catatrophe on Earth it caused lead to a rise in space travel and the colonization of many planets. The space station Liebe Delta is a training center for children who wish to become astronauts. However, the station harbors a dark secret, which leads terrorists to sabotage it and send it plunging into the Geduld. All of the instructors on board sacrifice their lives to save the students. In the aftermath, 486 children of varying ages find themselves aboard the Ryvius, a mysterious spaceship which was concealed within the core of Liebe Delta. With limited supplies, no adult supervision, and hostile forces still after them, they struggle to escape their pursuers and form a stable society. All they want is to be rescued - but a Government Conspiracy has convinced the media that the Ryvius has actually been commandeered by the same terrorists who destroyed Liebe Delta, so finding safe harbor will be no easy task.

While the series has a huge cast, with at least 33 named recurring characters, most episodes focus on a few core cast members. There's Kouji Aiba, an Ordinary High-School Student (or astronaut-training equivalent thereof) and main protagonist; his younger and far more violent brother Yuki Aiba; their childhood friend Aoi Housen; the charming but fervent Ikumi Oze; and the mysterious girl in a strange pink outfit who nobody recognizes and who seems to appear and disappear like a ghost (Neya). Other significant characters include the arrogant Zwei (elite cadet) leader Lucson Houjou, the popular and talented Zwei member Juli Bahana, the vicious gang leader Airs Blue, and the religious girl Faina Shinozaki.

The show has been described as a cross between Lost in Space and Lord of the Flies, by way of The Hunt for Red October. It won the 2000 award for Best TV Animation at the fifth animation Kobe.