Music / We Are the World 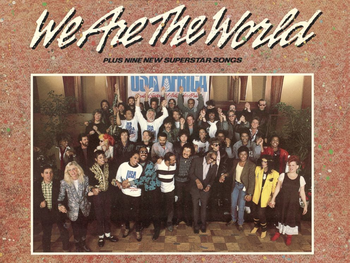 "There comes a time, when we heed a certain call
When the world must come together as one..."
Advertisement:

"We Are the World" is a song by USA for Africa (a Supergroup formed for the purpose), released in early 1985.

In 1984, Ethiopia was struck by a famine, making headlines across the world. The famine also struck the conscience of the entertainment industry. At year's end, Boomtown Rats frontman Bob Geldof gathered a bunch of major UK music stars together (highlighted by George Michael, Sting, Phil Collins, and various members of U2, Duran Duran and Culture Club) under the name Band Aid, to record "Do They Know It's Christmas?". A massive hit in its homeland (the biggest selling single in UK history up until "Candle in the Wind 1997", and still #2 on the list), it also made the American Top 20 and raised funds and awareness for Ethiopia.

Harry Belafonte decided that American performers should do something similar, so he called up Lionel Richie, who then contacted Michael Jackson, who agreed to perform and help with writing. Belafonte also contacted Kenny Rogers, Stevie Wonder and Quincy Jones, who assisted with conducting and producing the song.

Richie, Jackson, Wonder and Jones continued to tweak the lyrics up to the first recording session, and a special track was prepared for the performers who would be invited to perform on January 28. Included in the lineup were Ray Charles, Dionne Warwick, Bob Dylan, Diana Ross, Billy Joel, Paul Simon, Bruce Springsteen, Cyndi Lauper, and Willie Nelson, with a vast choir that included Dan Aykroyd, Bette Midler, the Pointer Sisters and the rest of Jackson's family, with Bob Geldof joining them in an Approval of God gesture.

"We Are the World" was released on March 7, 1985, reaching number one on the R&B Singles Chart and Billboard Hot 100, and raising $10.8 million within four months. Since then, the record has raked in $63 million, put toward both short-term and long-term humanitarian relief projects, with 10% of the funds also being used for domestic hunger and homeless programs.

Twenty-five years on, in February 2010, a new version of "We Are the World" was recorded and released following the Haiti earthquake, reuniting Richie and Jones for its production, with a rap verse written by Will.i.am. Material recorded by Jackson from the original was also interwoven into the new version, which features Wyclef Jean, Josh Groban, Usher, Janet Jackson, Lil Wayne and other well-known artists. All proceeds from the song were used by the newly formed We Are The World LLC to help with relief efforts in Haiti.

There's a choice we're making. We're troping our own lives: