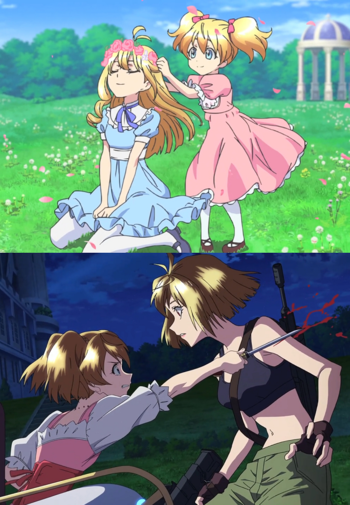 This trope is based on when family members, for whatever reason, end up fighting one another for whatever. Generally, this is because of one member making a Heel–Face Turn or the inverse, but can often happen due to someone manipulating another like in Deceptive Legacy and Insidious Rumor Mill. This rarely if ever comes up in works where Status Quo Is God. If a family member changes sides, then they are fighting their former family until the series ends or someone ends up dead. See Big Brother Bully, Cain and Abel, Abusive Parents, Archnemesis Dad, Hates Their Parent, Gruesome Grandparent, and Evil Uncle for examples of characters that tend to end up here.

Note that in order for families to count, both sides have to know that they were family before they started fighting. So Darth Vader and Father (the one from Codename: Kids Next Door) don't count as the family they were fighting didn't know about their relationship until later in the series.

Subtrope of We Used to Be Friends and Dysfunctional Family. Contrast Thicker Than Water. Also see Big, Screwed-Up Family.