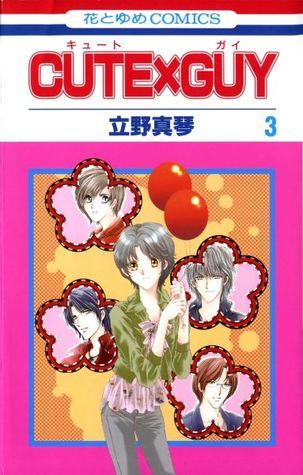 CUTE×GUY is a manga (not yet officially translated) by Makoto Tateno.

Sumi Takaoka is a generically cute girl with a problem, she has a crush on guy — Mitsuru Sudou — who rumour says prefers buxom and mature and sexy types... everything she isn't. However, she thinks may just be in luck as her Mad Scientist father has just invented a medicine that he has promised will give her the mature and sexy attributes she desires. So, heart pounding as it it always does when she's near Misturu she downs the formula in one gulp...

...and it transforms her into a mature looking, tall, and sexy... man! And it will do so now every time her heart races as that was her condition when she drank the medicine and she'll stay male each time she does until the effects have worn off two hours later. On top of all this, her father is not only out of the country but also deeply unhelpful whenever she contacts him as he's more interested in using her as a lab rat for his new medicine (designed to replace trans masculine gender confirmation surgery) and her mother who is a stylist just wants to use her as male model. Also she finds herself aggressively lusted after by the vampish school nurse. On the plus side Misturu looks up to her male self (who seems to present a more confident front as than she does as herself) and wants to be friends, figuring she'll get to know him better this way she decides to become his mentor, acquiring the name Jun Tadano by accident.

Soon other gender benders show up, mostly male-to-female, who have either been similarly conned by her father, or in one case are related to his biggest rival — all of them with different triggers and one of whom who develops a crush on Sumi.

CUTE×GUY provides examples of of the following tropes: