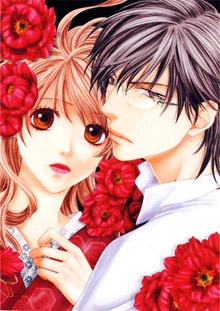 Desire Climax is a Shōjo Manga written and drawn by Ayane Ukyou. It was serialized in Margaret from 2004 to 2006.

The story starts out rather predictably: Mio Omori is from a poor family and works a cleaning job to scrape money together while her mother stays in the hospital. One night, as she's heading home from work, she witnesses a bunch of thugs beating up a ritzy sports car, only for the owner of said car to come out and kick ass and take names. When Mio goes to call the police, he grabs her by the hair and for some reason decides to make out with her. And then he throws money at her, claiming that he's "bought" her.

Things only get weirder from there. The next day Mio discovers that her assailant is none other than Shoei Jinnai, an extremely popular student and her landlord's son. From there it develops into a whirlwind romance which involves lots and lots of sex.