Don't You Dare Pity Me! 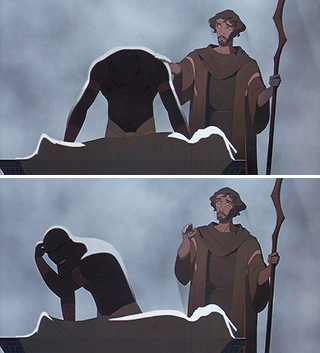 "LEAVE ME!"
"Every last one of them... They have the gall to take pity on me... and they don't even know... how much they're hurtin' me by doin' it."
— Nnoitra Gilga, Bleach
Advertisement:

An injured or suffering character is approached by another, eager to help, but the injured party is offended. This reaction of humiliation and resentment may be spoken, acted upon, or merely felt, but it is some variation on "I don't want your pity," or "Don't you dare pity me". This may be used as actual Stock Phrases, but the reaction does not have to be verbalized.

The more serious the problem, the more likely this is to cause conflict. Temporary situations can invoke it for a time, as when Manly Tears or worse Sand In My Eyes causes another to try to comfort the weeping character.

This is most likely to come from a character who does not deal well with sympathy, even in the best of times. The Broken Bird, Troubled, but Cute, The Tsundere, the Jerk with a Heart of Gold, and the Ice Queen are particularly likely to react this way. Indeed, it may develop that their touchy character stems from this and can be resolved if it is. The Woman Wearing the Queenly Mask doubly so, since anything for which she can be pitied is a weakness and danger. The Stoic Woobie is often this trope embodied. Getting them to fess up about it, much less confront it, can be a difficult prospect.

There is a range of possible interactions:
At one extreme, an injured character tries to avoid insensitive or demonstrative "sympathy" that rubs salt in the wound. They might accuse others of having Come to Gawk. They might fear that any response to their problem will break them down when they cannot afford to break down. The pity may be effusive for a trivial problem, or something that the character does not consider as such. In other examples, the character cannot tell their remorse is sincere; the Handicapped Badass is managing just fine, thank you.

At the other extreme, the sufferer rejects sorely needed and selflessly offered help and suffers all the more for it. They might inflict suffering on others in the process.

Genuine pity is often portrayed as an affront to the dignity of the pitied, as the pity-er is at least implicitly signaling their advantage over and superiority to the pitied, though there is also the popular Aesop that too much Pride is foolish and shallow. The injured character may hide from others to preempt pity. For any such character, mentioning his problem may hit a Berserk Button. The character can wallow in self-pity, but that is different.

The effect is more dramatic if the characters knew each other before the injury or if the problem is invisible. The pitying character may change after The Reveal. If the other person is in any way responsible for the injury, things can get very ugly indeed.

A hero sympathising with a villain's backstory may also incite this response, but be careful, this trope can be done badly. A character frequently angrily rejecting any form of comfort may come across as an Ungrateful Bastard or Unintentionally Unsympathetic when that may not even be the case. Alternatively, this can be presented as a genuine character flaw.

Compare Think Nothing of It, for when a character wants to avoid praise for admirable behavior, Leave Me Alone!, a common phrase also said by characters of this type, and Past Experience Nightmare, where the character tries to hide his pain but it still comes out in his unguarded moments. Also compare Declaration of Personal Independence.

Pikatwo swats away his concerned original.

Pikatwo swats away his concerned original.