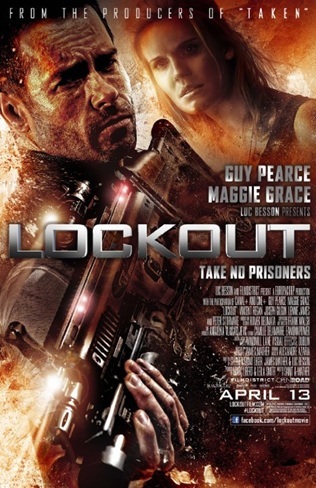 "We could send in one man. One man with one very specific order. To get Emilie Warnock out."
— Agent Harry Shaw
Advertisement:

Lockout is a 2012 action sci-fi film directed by James Mather and Stephen St. Leger. It was written and produced by Luc Besson. The film is set aboard a super max cryogenic prison stationed in orbit.

After an operation gone wrong, CIA agent Snow (Guy Pearce) finds himself wrongly arrested for the murder of his friend Frank Armstrong (Miodrag Stevanovix) and accused of selling state secrets. Things don't look much better when Secret Service director Scott Langral (Peter Stormare) presents him with evidence he killed Frank as well as claiming he saw him commit the crime with his own eyes. He is eventually threatened with incarceration on the MS One, a Supermax space penitentiary, where prisoners serve their sentence in stasis.

However a chance to avoid this fate soon presents itself when the president's daughter Emilie Warnock (Maggie Grace) finds herself a hostage aboard the MS One, when a chain of events lead to prisoner Hydell (Joe Gilgun) releasing all the prisoners from stasis after Secret Service Agent Hock (Jacky Ido) violated one of the prison's rules. Hydell's brother Alex (Vincent Regan), a quite intelligent prisoner, ends up taking over the convict revolt.

After some persuasion from Snow's friend agent Harry Shaw (Lennie James), who informs him his accomplice Mace (Tim Plester) is also there, Snow agrees to rescue Emilie from the station.