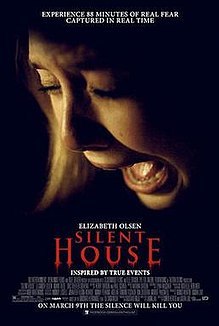 A 2012 Horror film by Chris Kentis and Laura Lau. It is a remake of the 2010 Uruguayan horror film, The Silent House (La Casa Muda).

Sarah (Elizabeth Olsen) is staying at a lakeside Victorian house in the country which her father and her Uncle Peter are renovating. After an unsettling encounter with an old childhood friend, she hears a noise upstairs. Her father goes up to investigate it but never comes back. Sarah finds that she's been locked into the house and something else is there, stalking her.