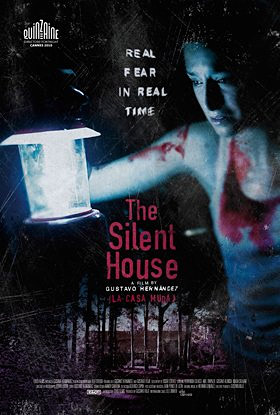 La Casa Muda (The Silent House) is a 2010 Uruguayan horror film directed by Gustavo Hernández, and stars Florencia Colucci, Gustavo Alonso and Abel Tripaldi. The film was marketed as being shot in one long, continuous take, and is supposedly based on real events that happened in the 1940s.

The plot follows Laura and her father, Wilson, as they arrive at a run-down cottage in a secluded area in order to repair it since its owner, Nestor, will soon put the house on sale. Before selling, Nestor tells them that the floor on the second level is unstable and that it is unsafe to go upstairs. Laura and Wilson intend to spend the night there in order to start the repairs the next morning. As Laura tries to sleep, however, she hears a sound upstairs. At Laura's insistence, Wilson goes up to see what is going on while Laura remains downstairs.

Things get worse from then on as Laura tries to escape from the house and ends up discovering the dark secret it hides...

It was remade for American audiences in 2012, titled Silent House.