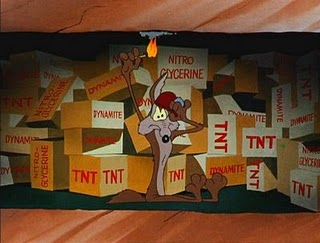 A trope commonly found in animation; two or more characters, usually hiding from something, have found themselves in an entirely pitch-black environment. One of them remarks on or complains about how dark it is. The other strikes a match — maybe even their last match — but the sudden burst of light reveals that the characters are, in fact, standing in the middle of an amazingly dangerous environment, be it a room filled with monsters (who have, up until this point, been remarkably quiet) or — to give the danger an added boost of irony — a room packed with an unimaginably large store of explosives (especially if the "match" turns out to be a Dynamite Candle). Guess what happens next?

Bonus points if the revealed monsters (or even the match-holder himself) blow out the match, implying that someone's going to be in a lot of pain while conveniently preventing the viewer from actually seeing it.

Subtrope of Lightswitch Surprise, which covers any surprising sight when a light is turned on. A likely to happen when lighting a Match in a Bomb Shack.

In Real Life, this is why matches and lighters are strongly advised against as immediate emergency lighting, especially after a disaster such as an earthquake or tornado where there could be burst gas lines (which won't even give you the warning of a labeled dynamite box before they explode and incinerate anything in range), scattered flammable chemicals such as gasoline and paint thinner giving off explosive fumes, or low-hanging easily combustible materials.