Western Animation / The Cat Came Back 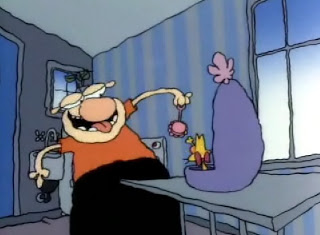 You'll be soooorrrryyyyy!
Now old Mr. Johnson had troubles of his own:
He had a yellow cat that wouldn't leave his home.
A special plan, with deception as the key —
One little cat — how hard could it be? (How hard could it be...?)
Advertisement:

The Cat Came Back is a 1988 Animated Short set to the tune of the 1893 comic song "The Cat Came Back" by Harry S. Miller, both illustrating that trope. The short, directed by Cordell Barker for Richard Condie and the National Film Board of Canada, features the hapless "Old Mr. Johnson" and his escalating but fruitless attempts to rid himself of a cat.

It was nominated for an Academy Award for Best Animated Short and has gone on to win dozens more. Johnson and the cat appeared in two adverts for Hula Hoops, with Johnson still trying (and failing) to get rid of the cat.

Not to be confused with The Cat Returns.

You can watch it

The Cat Came Back provides examples of the following tropes:

But The Cat Came Back, the very next day...