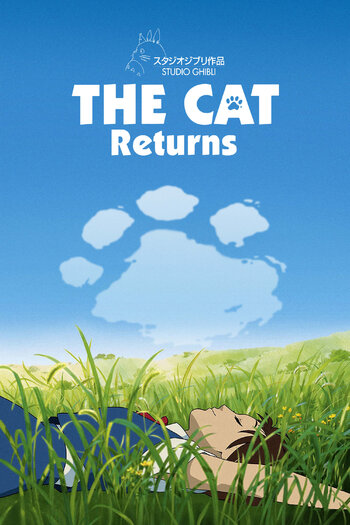 "If you find yourself troubled by something mysterious, or a problem that's hard to solve, there's a place you can go where you'll always find help..."
Advertisement:

A sort-of sequel to Whisper of the Heart conceived as a story written by the protagonist of the previous film, The Cat Returns (Neko no Ongaeshi, literally "The Cats Repay a Favor") tells a similar Coming-of-Age Story tale about Haru, a high-school girl learning to take confidence in her own abilities. Directed by Hiroyuki Morita in his directorial debut and written by Reiko Yoshida, it was released on July 20, 2002.

An average day for Ordinary High-School Student Haru Yoshioka (Chizuru Ikewaki) turns weird when she rescues a cat carrying a parcel from being run over by a truck... only for the cat to get up on his hind legs, bow to her, and thank her. Things get weirder when the Cat King (Tetsuro Tanba) and a cotillion of courtiers shows up in the middle of the night to thank Haru for saving the life of the King's only son, Prince Lune (Takayuki Yamada), and to offer her gifts to repay the debt. Unfortunately, their ideas of "gifts" (planting cattails in her backyard and filling her locker at school with live mice in boxes) cause Haru nothing but trouble... and then she learns they want her to marry Prince Lune!

Fortunately, it seems a few of the cats really are on Haru's side: she receives an offer of help from the "Cat Bureau," a trio of do-gooders consisting of a portly feline named Muta (Tetsu Watanabe), a living crow gargoyle named Toto (Yosuke Saito), and a handsome cat figurine called Baron Humbert von Gikkingen (Yoshihiko Hakamada). Just in time, as well, because Haru soon finds herself whisked off to the Cat Kingdom by a veritable army of felines! Even with the help of Muta and Baron, it'll take all the courage and wit that Haru can muster if she plans to get out of this mess.

Not to be confused with The Cat Came Back.

The Cat Returns provides examples of the following tropes: