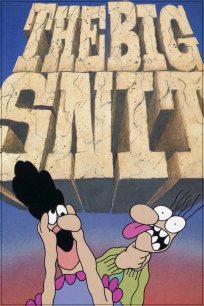 The Big Snit is a 1985 animated short directed by Richard Condie for the National Film Board of Canada. A husband and wife are playing Scrabble; as the husband obsessively re-shuffles the tiles on his rack (not that he can make many words with seven "E" tiles), the wife decides to do some vacuuming until he puts down a word. The husband takes advantage of her absence to watch his favourite television programme, Sawing for Teens, and begins sawing along with the teens on the TV before dozing off, thereby missing an announcement that worldwide nuclear war has broken out, and the human race has just minutes to live.

However, when he wakes up, he gives in to temptation and looks at the letters on his wife's rack just as she returns to the room, and in a parallel to the conflict outside, the two begin arguing over various petty irritations until the wife runs out of the room in tears. It's up to the husband to find a way to restore peace between the couple, while he remains oblivious to the fact that the world outside has failed to resolve its own conflict.

The film was nominated for Best Animated Short at the 1986 Oscar ceremony (some still say it was an Award Snub after it lost to another brilliant short Anna & Bella, a Dutch film about two sisters with similar existential themes).

It can be watched on the NFB's official YouTube channel.

The Big Snit contains examples of the following tropes: