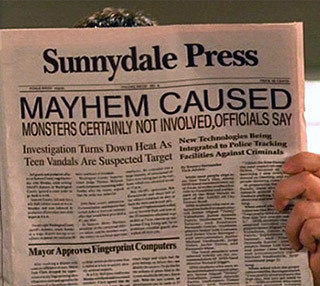 "This is our year. If we can focus, keep discipline, and not have quite as many mysterious deaths, Sunnydale is gonna rule!"
"People have a tendency to rationalize what they can, and forget what they can't."
— Rupert Giles, Buffy the Vampire Slayer, "The Harvest"
Advertisement:

In some universes, ignoring the antics of the story goes beyond the Bystander Syndrome. It seems that with your average person, their attention span is wholly taken up with the gray mundanity of their everyday lives. They simply refuse to see anything too strange.

Sometimes invoked for seriousness, such as an explanation in which exploits go on ignored by most people... but often, this is just one part of the Rule of Funny. Magic battles, alien invasions, and all other sorts of supernatural happenings often happen right in front of people's faces... and yet they merely glance out the window, and go back to their morning coffee, sometimes either not noticing it or just saying some excuse.

If it's ignored because they're incapable of seeing it, it's Invisible to Normals. Compare Bavarian Fire Drill, which exploits similar psychological tendencies. Contrast the Fisher Kingdom, where the world itself is the censor. Frequently Pink Elephants are invoked when the only evidence of the character's having drunk anything is what he claims to have seen that is being dismissed as a hallucination.

One of many things that enables the Masquerade, especially its extra strength variant, and allows Muggle characters to act like real people despite the extraordinary things that go on in their universe every day. When it's an actual power, becomes subject to You Can See Me? And they, in fact, can be seen By the Eyes of the Blind.

This can sometimes lead to Artificial Atmospheric Actions where NPCs merely treat all sorts of odd stuff as an everyday occurrence. Can also lead to the protagonists, especially if they're a small group or completely isolated from others that can see through the effect, seriously wondering if they're the ones who are seeing things wrong, or just insane.

Compare and overlap Unusually Uninteresting Sight, where something blatantly looks out of place to the viewer, but nobody notices (or cares to notice), and also Fantastically Indifferent, where the Muggles do acknowledge the weirdness, but are unfazed by it. Compare with Seen It All, where someone has simply experienced too many weird things to be fazed by them anymore. Also see Apathy Killed the Cat, where certain aspects of the strange thing in question raise no deeper questions in anyone, even if they acknowledge it.

Compare Perception Filter, which causes people to overlook something regardless of whether or not it's "weird".