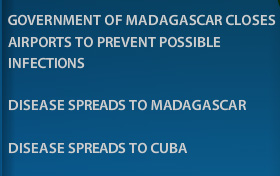 Did I just hear the Hallelujah Chorus? Wait, how can Madagascar close its NON-EXISTENT airport?
Pandemic is a web game developed by Dark Realm Studios that simulates destroying the world with your very own disease.
Advertisement:

The game randomly picks your starting location. Previously to that, you had to pick your bioweapon: parasite, virus, or bacteria, each with their own set of advantages and disadvantages. Over time, you get points for infecting people and killing people with your bioweapon. These points can be spent adding various attributes to your virus, like symptoms, resistance, and new means of transmission. This can make your virus more lethal, more contagious, more powerful, but more visible. On the other hand, the governments of said infected countries will do their best to stop the spread of your bioweapon: burning corpses, killing carriers, etc.

Sound easy? Not so much. You'll know you're doing well if you infect these countries:

is a semi-sequel to Pandemic 2 for iOS users and was released on the App Store in the summer of 2012.

Come try out the original

This game has a Spiritual Successor in the form of Plague Inc., a game released on mobile devices and developed by a company named Ndemic Creations. This successor has an Updated Re-release, Plague Inc: Evolved, released for PC, Mac and Linux.

Not to be confused with the cooperative board game of the same name, where the players goal is to CURE the world of a disease epidemic, itself having been adapted to a PC, tablet and console game. It also has a reputation for being fairly challenging. Interesting, eh?

Remember, in Real Life, moving to Madagascar will not make you immune to deadly pathogens.