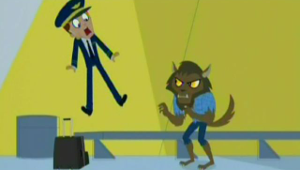 "Increase security, I said. Put in a werewolf detector, I said. Roger, you're being paranoid, they said. Well, who's paranoid now!?"
Written by David Shayne

One dark moonlight Halloween night at Littlest Pet Shop, Blythe enters the day camp area dressed as a cowgirl. Youngmee attempts to enter too, dressed as Mount Rushmore. With enough force, she gets pulled in. Blythe calls for the pets, but they're nowhere to be found. Suddenly Penny Ling stumbles in, and it's revealed she is a zombie! Russell and Vinnie appear as well, also zombies. As the others enter, Blythe and Youngmee panic and run. As the pets corner Youngmee, she screams and she too becomes a zombie. Suddenly Sunil appears at the dumbwaiter, declaring the zombie virus is in the pet treats. Sunil exclaims there's no known cure for Z.I.T.S.: Zombie Infected Treat Syndrome. Blythe realizes the pets aren't saying "brains", they're saying "bran". Blythe sees that the treats have no fiber in them, so the pets must be bloated. Blythe rushes to the food supply and gets the Call of Nature All Natural Fiber Flakes. She feeds all the pets and Youngmee and they return to normal.

Pepper comments that really wasn't Blythe's best, revealing that this was all a Halloween story. None of the pets except Vinnie found it scary. Pepper comments that anyone could create a scarier story, so since the pets' owners are out on Halloween, there should be a scary story contest, and the winner gets a candy coated liver ball. Vinnie is appointed to be the judge. Meanwhile, Roger is at the airport, tired from jetlag, not even certain what day it is. Suddenly, in the full moon, a werewolf in seen, scaring Roger. He runs away, and the werewolf reveals he's actually in a costume.

Back at the pet shop, the story contest begins. Russell starts with his story. At the day camp, Mrs. Twombly shows the new day camper, Vlad the bat, who Penny Ling, Pepper, Zoe, and Minka immediately fall for. The girls introduce themselves, and Vlad talks about how he is looking for true love, eliciting responses from the girls, and Blythe as well. Confused, Russell is wondering how Vlad is putting the girls in a trance, and he comes to the realization that Vlad must be a vampire, cueing a song about him being a vampire, in which Russell rescues the pets from Vlad's advances. At the end of the song, Russell opens the window shades and blinds Vlad with daylight, ending the story. Zoe responds that the story is more gross than scary, Penny confused at the brooding bat, and Pepper thinking the song is gimmicky. They ask Vinnie, the judge, and he is so scared he says Russell wins, even though they haven't all got a turn yet. Meanwhile on the Downtown City streets, Roger is driving home, scared. At a stoplight, he witnesses people in costumes. As he drives off, he runs out of gas.

Zoe finishes telling her story, about how the craft services table at the photo shoot was out of low-fat muffins, with everyone being unimpressed. Pepper starts her story. Waking up one day, Pepper realizes she will be late for a gig of hers. Driving on a snowy mountain road, Pepper loses control and wakes up in Penny Ling's house in bed. As Penny Ling brings her food, she says she is Pepper Clark's biggest fan, laughing maniacally, scaring Pepper. Penny Ling says she found Pepper and brought her back to her house. Pepper tries to escape, but is tied to the bed by rubber chickens. Pepper comments she has to get to a show, and Penny Ling says she does too, pulling a book from the bookcase and converting a wall into a stage where she tells terrible jokes dressed like Pepper, tormenting her as she tries to escape. Pepper wakes up, as this is all a dream, relieved, however once she gets to her show, everyone in the audience is Penny Ling. The story ends, and the pets and Blythe are scared and impressed. Blythe believes they have a winner, although Vinnie says Sunil hasn't had a turn yet. Sunil runs away instead. Meanwhile, hiding in a dumpster, Roger is scared of monsters. He hides from trick-or-treaters and runs away.

Blythe proceeds to give the candy to Pepper, but Sunil re-enters, wearing a lab coat he claims is from his great grandfather Doctor Sunilenstein, and proceeds to tell a story. Doctor Sunilenstein experimented in the unnatural. He asks his assistant, who looks like Minka, for the brain (which is actually a peanut), and puts it into a monster that looks like Vinnie. Minka throws the switch, and Vinnie comes to life and walks away, bumping into a record player that plays music, and Vinnie proceeds to dance. Suddenly, the other pets, with pitchforks and torches, enter, claiming Doctor Sunilenstein has violated the laws of nature (not to mention the blackout when he threw the switches). Vinnie is focused on dancing, asking the others to dance, but they back away. The other pets charge, but Doctor Sunilenstein tells them to leave Vinnie alone, as he means no harm. Vinnie proceeds to dance, but spins out of control, slamming into the generator, causing an explosion. The story ends, Sunil says everything was destroyed except the lab coat and the monster, who continues to dance alone forever. The story scares everyone. Vinnie scares everyone, and Sunil and Vinnie laugh together. Blythe gives the candy to Sunil.

Suddenly a moaning noise is heard outside with a zombie-like silhouette. It's actually Roger, who found his way to the pet shop. Freaked out, he asks Blythe to run, but Blythe says it's Halloween. Blythe asks Sunil about the monster in his story, asking if he was doomed to dance alone forever, and he says Doctor Sunilenstein created a bride for him, played by Buttercream.