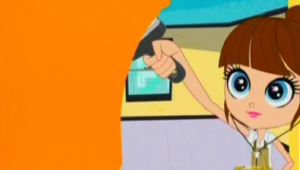 "It's time for me to do away with the frilly and bring on the sleek! LPS will just have to wait a while today. I've got work to do here!"
Written by Tom Minton

As Blythe finishes cleaning up her bedroom, her father Roger comes in to bring Blythe her magazine, which contains an article about trendy bedrooms Blythe had long waited for. Not too sure why Blythe is so excited, Roger leaves Blythe to her devices as Blythe finds a photograph of a room she particularly likes, only for Blythe to become disappointed with her actual bedroom. With newfound drive, she sets out to do some renovation. Grabbing a power drill, Blythe removes the screws from her bedframe's curlicues, having noticed there are none in the photograph. Finding her notepad on her bed, Blythe then starts jotting down ideas on how to make the most fashionable bedroom imaginable.

At the Littlest Pet Shop, Mrs. Twombly brings in a new pet: A male kitten named Meow-Meow. When Mrs. Twombly leaves, Sunil comes up to Meow-Meow and tells him he can tell the others what he'd like to do. Meow-Meow asks why, which confuses Russell, telling Meow-Meow that no one's responded like that before. Meow-Meow continues to ask why to every statement Russell says, causing Russell to grow more frustrated with each inquiry.

A pile of crumpled up papers of rejected design sketches now sits in Blythe's room next to her as she complains that she cannot think of anything chic enough to work. As she gets up to head to the dumbwaiter, she puts her magazine on a bedstand, knocking down a pair of sunglasses. observing them, she pops out the lenses and gets inspiration, cutting out glasses designs for her bedspread and installing woven elastic strips into her chair for bounciness.

Downstairs, Zoe is trying on an outfit and says to Meow-Meow that it looks dated. Meow-Meow asks why, so Zoe explains that it was more appealing the previous year. Meow-Meow asks why again, but Zoe cannot find an answer and transfers Meow-Meow over to Pepper. Pepper asks if Meow-Meow wants to hear a joke, but Meow-Meow asks why. Pepper explains that it's what she does, and Meow-Meow asks why again. Pepper ignores the question and starts telling jokes, but Meow-Meow doesn't laugh, simply staring at Pepper. After two attempts, Pepper gives up, and Vinnie moonwalks in and asks if Meow-Meow would like to see him dance. Meow-Meow asks why, which instantly causes Vinnie to fumble his thoughts and undergo a mental breakdown. As he lies on the floor trembling, he mumbles that he needs Blythe's help. Russell overhears this and figures that Blythe can come down to resolve the problems Meow-Meow has caused. However, upon asking around, he and the other regulars realize that none of them have seen Blythe at all that day, with Minka noticing the dumbwaiter has been jammed, stuck at Blythe's room. As they discuss about how they need Blythe's help, Meow-Meow asks why. Penny walks over and says that Blythe is the only human who can talk to animals, but when Meow-Meow asks why again, Penny is at a loss for an answer. The pets have a discussion among themselves, and none of them can find a satisfactory answer.

In Blythe's room, Blythe finishes putting together a new ceiling lamp. As she's about to head down the dumbwaiter, she stares at her white dresser, then figures to paint it black.

With the dumbwaiter stuck, the pets have no choice but to discuss among each other about how Blythe can speak to animals. Minka proposes that Blythe was raised by apes and learned fashion sense from taking up cave painting, then was put into a zoo where Roger visited and adopted her. Sunil suggests that Blythe is a master magician who's very keen at reading people and animals but that her true secret must be guarded due to the nature of her job. Vinnie scoffs at Sunil and claims that Blythe must have super hearing that allows her to hear signals from translator aliens and interpret their language as human language and fashion designs. The absolutely bizarre nature of Vinnie's story, however, causes the entire room to go quiet.

After Blythe finishes painting her dresser black, bursts of inspiration start flooding into her head, and she spends the next while busily redecorating and repainting her room. After painting the walls in grayscale, she starts consulting her magazine for more ideas, with the end result being a rather close approximation of the bedroom in her magazine, accounting for the room's geography.

The pets downstairs start to bicker about the validity of their explanations, but Penny notices something amiss: They cannot hear Meow-Meow at all. After some searching around the day camp, they find Meow-Meow clinging to the dumbwaiter rope, having attempted to reach Blythe to find an explanation but getting stuck just below the dumbwaiter itself. With none of the pets able to devise a rescue plan, they call out to Blythe, but she doesn't respond as she's listening to loud music in her earbuds renovating her room. Minka tries to rescue Meow-Meow, but Meow-Meow unknowingly stalls Minka asking "Why?" long enough for Minka's claustrophobia to consume her and cause her to scramble back down the shaft in terror.

Vinnie and Sunil give a try next. The two of them puff out their chests, run out the Littlest Pet Shop's front door, and leap up to open the door to the apartment, then scurry up the staircase to get to Blythe's room. Meanwhile, Roger enters Blythe's room and is mightily impressed with how it looks, but can't help but cry looking at it. As he sulks back out, Blythe asks why he's feeling sad, and Roger tells her that he'll miss the way Blythe's room used to look because she made it hers and hers alone. As Roger leaves, Blythe looks at her room, then in a mirror, and realizes her father is right and that she turned her room into something a magazine had suggested instead.

Vinnie and Sunil make it up the stairs to the third floor, but they have used up all of their energy and are exhausted. They stand in front of the door to Blythe's apartment and take a break, but Roger walks out from there, spots them both, and carries them back to the day camp. The two walk back with the last of their energy, dejected.

As this happens, Blythe takes the earbuds out of her head and hears meowing but cannot determine where it's coming from. After a bunch of searching around, she goes to the dumbwaiter and wonders out loud if there's someone there. Russell, Penny, Zoe, and Pepper, still at the bottom, call out to Blythe that Meow-Meow has been stuck in the shaft and needs Blythe's help. Blythe takes a book to hold the dumbwaiter slightly above, then grabs the rope and starts slowly pulling up in order to get Meow-Meow through the gap. Blythe apologizes for not having been there earlier because she was busy redecorating. As Meow-Meow repeatedly asks why to Blythe, it gets her thinking about the reasons behind her sudden compulsion to change how her bedroom looks and that she'll do so when she's older.

Blythe reaches the bottom, and the pets all start asking her why she can talk to animals. After a moment of thought, Blythe tells them that she herself doesn't really know. At that point, Mrs. Twombly steps in to tell Blythe that Meow-Meow's owner is back, and Meow-Meow excitedly leaps out of the pack and to Mrs. Twombly, where she carries Meow-Meow away.

Blythe brings the pets up the dumbwaiter to show them what her new bedroom looks like, and Minka is the first to point out that it looks exactly like the old one and that it really defines her as a person. Blythe finds the magazine, open to that page with the photo on her desk. She takes a look and tosses it in the wastebasket with her rejected designs, then grabs her teddy bear and joins the pets. Roger, hearing the commotion, quietly opens the door to see Blythe's bedroom exactly as it used to be, with Blythe surrounded by pets and joy.