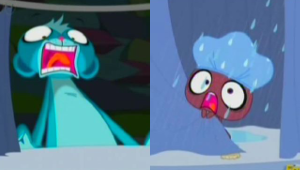 "There's an actual spider living in the day camp with all of his hairy eight legs and his shower cap and his body wash, peach-scented, and the other pets have made him a place to live in! What am I going to do!?"
Story by Julie McNally Cahill & Tim Cahill and Roger Eschbacher
Teleplay by Roger Eschbacher

Vinnie spots a fly buzzing around the day camp and attempts to grab it with his tongue, but in the process, bumps into all of the other pets, disturbing their daily routines. They soon reach their limits and call out Vinnie on his antics, though Vinnie still struggles to control his impulses and must be called out a second time. Depressed, Vinnie climbs up a wall and sulks, lamenting that no one understands him. Suddenly, Vinnie hears a voice from a shadow expressing agreement, a spider who introduces himself as Weber and has been trying to catch that same fly for two days. They quickly find the fly's evasiveness a common ground and become emotionally attached to each other, telling each other stories about their failures in catching flies.

When Vinnie tells Weber about winding up at a landfill, however, Weber imagines it must be full of flies and asks why he didn't stay there. Vinnie points out that the day camp is where his friends are, describing Sunil as his best friend but warns Weber not to make himself known, as Sunil is arachnophobic.

Meanwhile, Blythe travels down the road to donate boxes of old clothes, with Sue helping out in exchange for frozen yogurt. She heads to her favorite shop and meets Kora Dixon, a new worker who sometimes uses the clothes for inspiration for her own wardrobe. When Kora sees how small some of the clothes in the boxes are, Blythe fills her in of her "Blythe Style" line of pet clothes. Before long, Blythe and Kora soon lose themselves in the conversation about her pet fashions, leaving Sue feeling left out and unable to contribute to the conversation. Annoyed, Sue leaves the shop and bumps into Youngmee on her way out. Sue asks if Youngmee would like some frozen yogurt, and the two leave the area.

Back at the day camp, Everyone except Sunil are huddled together to discuss something. Sunil comes over and grows suspicious, but when he fails to get answers out of anyone, he goes straight to Vinnie, who is hiding Weber in his left cheek. Vinnie, unable to talk, also tries to avoid Sunil and his interrogation, and narrowly convinces Sunil to leave. With Sunil away, Vinnie spits Weber out immediately, and the two of them agree that it was a bad idea. They get back to what they were doing before: listening to Weber's anecdote about a crow attempting to eat him. From a distance, where Sunil is hiding behind a table leg, however, it looks like more of that huddling. Sunil initially wonders what sort of secret would necessitate even Vinnie to not spill the beans and concludes it must be a surprise party.

Blythe and Kora are still chatting at the shop, with Blythe sharing photos of the pets in outfits. Marveled, Kora asks if Blythe can design clothes for people as well. Initially hesitant, the two scour around the store for items, and Blythe leaves with a huge pile to carry back. As she leaves, Sue and Youngmee find Blythe on the sidewalk, and Blythe excitedly tells them that Kora has suggested making clothes for people. Sue, however, reminds Blythe that they've suggested it before. When Sue asks if Blythe would like to go play tennis, Blythe says she has too many ideas and rushes home, with Kora following behind with a wagonload of her own things. Sue and Youngmee, watching it happen, wonder if they've been demoted as BFFs.

Sunil walks into the day camp to see a wall of pet food bags have been built in a corner. Looking to see what's up, Sunil walks over and hears Pepper talking about supplies and Russell talking about putting everything together. Still convinced they're holding a party for Sunil, he leaps away in joy when in truth they're simply building a spider habitat for Weber.

At school, Blythe spends her time between classes sending and receiving texts and notifications from Kora. Sue and Youngmee attempt to strike up conversation and discuss their plans at the mall, but Blythe ignores them and continues to exchange messages with Kora. Sue and Youngmee discuss how Blythe has been dismissing them as of later, and when Blythe shows the two of them Kora's latest text, Sue and Youngmee walk away in disgust.

Hiding behind the fire hydrant, Sunil overhears Russell telling the other pets to take a break as they're close to finishing. He sneaks in through a hole in the side and stares at the structure the other pets have built. Hearing running water and singing coming from one particular spot, he opens the curtain to see Weber showering. Weber and Sunil exchange screams until the other pets scramble into the room, and they see Sunil running out of the barricade and into the dumbwaiter, terrified.

Blythe, working on some human clothes, decides to call up Youngmee and Sue. Blythe wonders why they're keeping their voices low, and Sue reminds Blythe that they're at the library, which Blythe suddenly remembers she'd meet the two of them at. Nevertheless, Blythe still wants to show Youngmee and Sue her design, but Sue suggests Blythe call "her" with Youngmee chiming in that they know Blythe knows her number, the two of them hanging up.

Blythe, still in her room, hears Sunil's screaming coming up the dumbwaiter, and after a few seconds, sees Sunil pop out of the compartment and cling to Blythe's face in terror over Weber. Sunil rambling a mile a minute about what Sunil has seen thus far, Blythe attempts to take in everything Sunil has spoken. When finished, Blythe advises Sunil to give Weber another chance, as the other pets seem to have taken a liking to him. Seeing Sunil still scared, Blythe accompanies Sunil back down the dumbwaiter and asks the other pets to show Weber's new home. Blythe is impressed, but Sunil still cannot trust Weber. Blythe coaxes Weber out from behind the flower pot and starts conversing with him, but Weber immediately sees Sunil hiding above Blythe's head and asks if he's going to start screaming. Sunil then asks if Weber will do the same, and Weber explains that he was simply startled when Sunil opened the shower curtain and apologizes to Sunil. Sunil climbs down from Blythe and says that he himself should be apologizing for opening the shower curtain at all, mentioning the peach-scented soap. Weber corrects Sunil in that it was actually apricot-scented and the two manage to make conversation about what they're afraid of.

With that problem solved, Blythe laments that she's still stuck about what to do with herself and her friends. The pets are eager to speak their minds, but Weber, based on what he just experienced, suggests for Blythe to try to get her new and old friends to know each other better, which lifts Blythe's spirits, happily running out of the room.

Sunil, still convinced the other pets are giving him a surprise, demands to know what it is. When the other pets respond with confusion, he asks Vinnie, who tells him that his surprise was a lesson in how not to be scared of spiders. Sunil stares at Weber for a moment, then stares forward and leaves.

Blythe stands in front of the frozen yogurt shop and meets up with Youngmee and Sue. After a few awkward moments, Blythe says sorry for having neglected the two of them and how bad she felt for ignoring them repeatedly. In the middle of her apology, Kora emerges from the thrift shop next door and tells Youngmee and Sue that Blythe actually speaks highly of them all the time to Kora and admires how they're all so close with a tinge of jealousy, astonishing Sue and Youngmee. As a token of appreciation, Blythe takes out of the bag she's been carrying an animal-themed hat for everybody present, which everybody loves.

At the Littlest Pet Shop, the pets and Weber are having a nap. Suddenly, Vinnie wakes up and announces loudly, waking up Weber as well, that he now understands the pun in Weber's name.