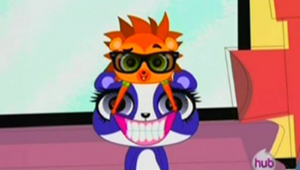 Russell is sorting squeaky toys between loud ones, quiet ones, and broken ones when he sees Pepper doing a comedy routine with a gag arrow. Horrified that someone could get hurt, Russell jumps onstage, wraps the arrow with a thick layer of bandages, and hands it back to Pepper. Everyone walks away, Russell having ruined Pepper's act.

At Downtown City Park, as Blythe takes Minka and Zoe out for a walk, she bumps into Sue, who's jogging backwards. When they both get up, Sue notices that she's a mess whereas Blythe is still as clean as ever. Blythe invites Sue over so she can clean herself up. After they arrive at Blythe's room and Sue changes into some of Blythe's clothes, Sue is awestruck by Blythe's accomplishments in fashion design and feels humbled by Blythe's intelligence and sense of style. She starts bombarding Blythe with questions about her preferences, but Blythe tunes them out.

With Russell's neatfreak on overdrive, Vinnie and Sunil take to purposely rearranging everything Russell has neatly organized for the day. Russell eventually finds out it's them, but they've had their fun. Russell goes around the day care room making sure everything else is in order, and when he's done, he asks Penny Ling if he's too serious. Penny recalls how Minka's last birthday party got interrupted because he put out her cake's candles with a fire extinguisher before she could blow it out, concluding that Russell is too serious and that Russell should learn to relax.

The next day at school, Sue continues to wear the clothes Blythe provided and asks if she can wear them for longer. Once Blythe tells her that she can hold on to them for as long as she likes, Sue starts finishing all of Blythe's sentences for her, which causes Blythe to feel nervous. At lunch, Sue follows closely behind Blythe at the cafeteria line and picks up the same food Blythe picks up, constantly telling her that she's perfect (and still finishing Blythe's sentences for her). Blythe attempts to fake Sue out when grabbing beverages but fails. Blythe insists for Sue to be unique, even offering her suggestions, but Sue ignores them. Before long, Sue has changed clothes to be identical to Blythe's, then her hair, and then her school schedule so she can be with Blythe all day.

The Littlest Pet Shop gets a new arrival: Mary Frances, a pig. Because of Mary Frances's name, all of the other pets assume this visitor to be female, which drives him up the wall. He points out he's male before the situation worsens, however. Russell goes off with Mary Frances to conduct a survey with him. When he finishes, Zoe, Pepper, Vinnie, and Minka have dressed themselves up in flamenco attire to sing and dance around him in an attempt to get Russell to loosen up. This only irritates Russell further.

Blythe returns to The Littlest Pet Shop to see "Fun Russell," who wears an aloha shirt and sunglasses and drinks out of a coconut. He tells her that he wants people to see him in a certain way by wearing a new shirt, which gives Blythe the idea to come to school the next day in a gaudily colorful outfit. Instead of being eye-poppingly clashing, the Biskit Twins take an instant liking to it, and every girl in school now wants one, and Sue comes to class the next day in that attire.

Fun Russell, taking Vinnie and Sunil's lead, proceeds to mess up everything he had neatly sorted out. He sees Pepper juggling some balls and puts her gag arrow back on. He adds bowling pins, an anvil, and a chainsaw, then blasts an air horn in her ear to make her fall. Pepper takes it in stride, however, and as Fun Russell continues to live hedonistically and make a mess of the room, the other pets have a blast, except for Mary Frances, who's spent his time hiding behind a chair. Having had enough, he leaves the day care room with nobody noticing.

Blythe discusses with Youngmee and Jasper her concerns about Sue's behavior. She lets them know that Sue's been trying to imitate Blythe with the impression she's perfect to which Jasper knows but also doesn't have the heart to tell it. Unbeknownst to the three of them, Sue is nearby and overhears Blythe. As Sue goes off to contemplate what she's done, Blythe sees a poster showing off varsity tryouts for the long jump and gets an idea.

Back at the pet shop, all of the pets except Fun Russell have noticed Mary Frances is missing. Fun Russell initially doesn't take it in, then thinks that it's a trick to get Fun Russell to go back to the way he was before so they can make fun of him. Sunil figures this means they'll have to look for Mary Frances without Russell's help. Their search ends in a flop, however, as no one is able to find Mary Frances. After seeing their failure and Penny cry, Fun Russell hangs up his Viking helmet and helps the other pets find Mary Frances. Russell, back to normal, retrieves his clipboard from the survey to figure out where Mary Frances would be most comfortable and splits the pets up to those locations.

At the tryouts, Sue tells Blythe that she overheard the conversation and realized it's best to do what she wants to do and not to imitate Blythe all the time. Blythe, who intended to show how imperfect she is through the tryouts, no longer has a reason to be there and attempts to quit, but the coach refuses. Blythe gives it a shot anyway and, right before she reaches the sand, trips over her shoelaces and falls flat on her face, but Blythe gets back up unhurt. Sue, on the other hand, pulls a new school record and makes the team. With newfound confidence in herself, Sue gets carried off in pride by the other students.

Back at the pet shop, Russell discovers a trail of food and follows it to a sleeping Mary Frances under a table. Mary Frances is safely reunited with his owner, and while Russell is back to how he used to be, he has loosened enough to be okay with being called Rusty and wearing a gag arrow on his head.