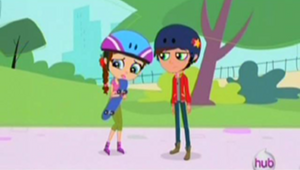 Sue introduces Blythe to roller skating and soon coerces her into trying skating on one leg. Blythe manages to avoid a man on a bicycle but crashes into a boy about her age. Immediately lovestruck, she introduces herself, stammering all the while. The boy, meanwhile, simply asks for his skateboard back. As he leaves, Blythe realizes that he dropped his keys on the ground and forgot about them.

At The Littlest Pet Shop, Sunil practices his latest trick using a set of playing cards when Zoe asks for Sunil's help in finding her beret. Seeing it still on her head, Sunil suspects it's a prank and walks off with the playing cards. Before he can go far, Zoe calls the other pets over and tells them of Sunil's newfound psychic powers allowing Zoe to reclaim her hat. Blythe arrives in the pet shop and, after much stumbling over words, tells the pets she found a set of keys and wants to return it. Zoe assigns Sunil, trusting that his so-called psychic powers will allow Blythe to locate the keys' owner. Sunil gives it a shot anyway and envisions the street corner of Maple and Main. Blythe excitedly rushes out the shop to head there with Zoe tagging along to witness Sunil's powers at work.

Mrs. Twombly walks into the day care room with a scarlet macaw: Esteban Banderas. After Mrs. Twombly leaves, the pets say hello, Vinnie introducing himself with a dance. Unimpressed, Esteban claims that the dancing in his native Colombia is leagues better than his and then tells the story of his past: In the village where he came from, a trio of bandits captured all of the villagers and easily incapacitated the sheriff. With no one else available, Esteban swoops in and lures the bandits off a cliff. Russell, Pepper, Penny, and Minka enjoy Esteban's story, but Vinnie becomes resentful of Esteban brushing him off.

Blythe drives her scooter to Maple and Main and spots a brown-haired skateboarding boy wearing the same jacket as the boy in the park. Blythe calls him over to find out that he's the wrong person, but upon Blythe pointing out the boy has a scar below his left eye, this boy identified him as Josh Sharp and lets Blythe know that he's likely at the library.

When Mrs. Twombly steps away from the cash register, Vinnie searches for Esteban's deeds on her tablet and gets no results. He confronts Esteban about this, who admits he may have exaggerated a bit. Before Vinnie can continue his argument, Sunil bursts into the room to say that Blythe is in trouble. This time, he sees a sitting lion. Esteban plays hero and leads the pets out of the shop and to the zoo.

Blythe arrives at the library—which has statues of sitting lions at its front—and sees Josh walking into it. Seeing a "No Pets Allowed" sign, Blythe stuffs Zoe into her tote bag and starts searching for Josh. Zoe spots him at a table, her yapping drawing the attention of the other patrons. Blythe goes behind a shelf and reminds Zoe to stay quiet, but when she returns, Josh is gone. Blythe spots Josh going into the restroom and waits by the door for him to come out, but Zoe complains of thirst. As she gives Zoe a bowl of water, she sees Josh leaving the library and onto a bus.

The pets arrive at the zoo and see a sign restricting animal entry. As they decide what to do next, Sunil gets a vision of a flat bowl. Minka brainstorms different possible bowls, and the pets ultimately decide Sunil must be seeing an ice cream bowl, and the pets head to Blythe's favorite ice cream parlor.

The bowl turns out to be part of the logo for an indoor skate park Josh has traveled to. Blythe follows Josh into the skate park and tries to skate her way across, but she proves just as incompetent on a skateboard as she is on roller skates, narrowly missing several skaters but crashing anyway.

At the ice cream parlor, the pets spot lots of bowls but can't find Blythe. They take a break and eat the ice cream and its toppings until they're caught by an employee and chased out of the store.

Blythe notices Josh leaving the skate park and chases him down directly, where she discovers Josh is a guitarist of a garage band playing at the park. Zoe, unable to resist singing to the music, hops out of Blythe's bag and goes onstage. Blythe scrambles onstage to stop Zoe but notices Josh there. She returns the keys to him, and he thanks her with a hug. Blythe and Josh ride the wave through the crowd, Blythe brought back to the floor and Josh back onstage. When the song ends, Josh is nowhere in sight once again, but Blythe, on cloud nine, tells Zoe she had a wonderful time. The pets, meanwhile, make their way to the concert just as the crowd rushes out of the park. Esteban tells all of the pets to grab onto Vinnie, and with all his might, lifts them above the stampede and onto a tree. Up there, Sunil kicks himself for having misled the pets so many times but spots Blythe down below, letting the other pets know.

Esteban returns to the tree branch and confesses to Vinnie that he never did any of the deeds he did. However, Vinnie thanks Esteban for getting the pets out of the rush of people. Back on the floor, Sunil apologizes to Blythe about having made her go through an unnecessary amount of trouble over his vision of "Maple and Main." Blythe, seeing Josh hanging out at that street corner, reassures Sunil that his psychic powers are not as inaccurate as he may think.