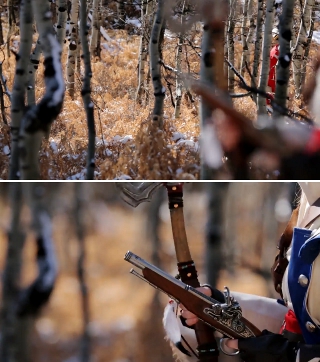 You know what would fix this? Bifocals.
"Whoa. My eyes really rack focused there!"
— Tom Servo, Mystery Science Theater 3000
Advertisement:

In motion picture and film-based television production, this is often done by a separate person (the "focus puller" or "first camera assistant") rather than by the primary camera operator. In video production, the cameras usually aren't large enough for this to be necessary, and on consumer-level gear such as smartphones and point-and-shoot cameras, it might not even be possible because of the way autofocus is usually implemented.note Now that video-equipped DSLRs have made inexpensive, near-film-quality video a reality, rack focus is something nearly any camera operator with access to one can do. However, it requires either a very steady hand (and tripod), a pile of expensive Hollywood-style equipment (the big guys are starting to use DSLRs too), or a software hack like Magic Lantern that can automate the process by taking over the camera's autofocus mechanism. Also take note of a lens quirk called focus breathing, where the lens may slightly zoom in or out when the focus is adjusted. Unlike DSLR lenses, cinema lenses are engineered to eliminate that quirk. Needless to say, like every other pro trick that amateurs pick up, it can be horribly misused.

Sometimes used in two-dimensional animation, which involves filming the foreground and background separately and then combining them.

In theory Rack Focus should be made redundant in new 3D films because the viewer would be able to change focus at will. Of course because it is only a simulation of 3D, this isn't quite true and the technique remains. This sometimes causes frustration as the viewer wants to change focus but cannot.

If you were expecting a trope about shots focusing on women's racks, see Male Gaze.