"Metaphor" Is My Middle Name 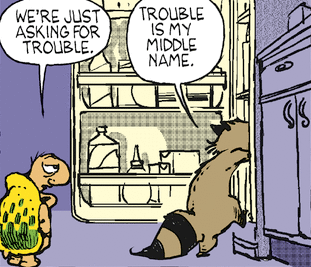 "I thought Danger was your middle name."
"I have lots of middle names..."
Jamie: Trouble is my middle name.
Kari: Really? I thought it was Earl.
— MythBusters note Incidentally, it's actually "Franklin".
Advertisement:

A difficult situation presents itself, or the protagonists find themselves in a bad situation. One of them says something about the situation, like how dangerous it is. And then another character, showing how tough they are, takes that description and says it's their middle name.

On the lighter side of this trope, it may be when a character states that they're up to a task, and to prove it, that the nature of the task just happens to be part of their name.

Often played with these days, such as having another character then say they thought their middle name was something else (almost invariably embarrassing), or pointing out how silly it would be if that was really part of their name. Or that they have Only One Name, so can't have a middle. Or, conversely, having it actually being their real middle name.

Total Eclipse of the Sunspot

Jet claims that 'super smart' is his middle name.

Total Eclipse of the Sunspot

Jet claims that 'super smart' is his middle name.