"Walk on the Wild Side" Episode 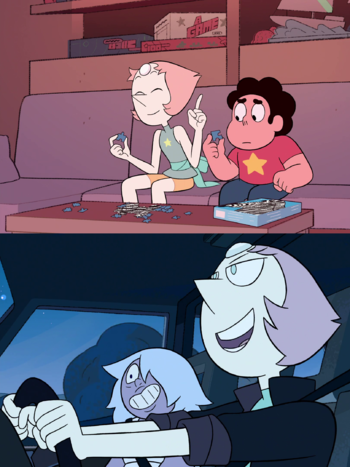 Puzzle Pearl to Pedal Pearl!
"Am I a good boy? Would a good boy do this? I am running with scissors! I’m going swimming right after lunch! … I’m going to pet dogs no matter where they’ve been. Look out world—Frasier Crane’s gonna raise some hell!"
— Frasier, Cheers
Advertisement:

In most sitcoms there is always the one character who is responsible and trustworthy. They are structured, neat and orderly and would never think of doing anything reckless or illegal. They might be a Control Freak but they don't have to be.

If this character exists in the series then 9 times out of 10 there's going to be an episode where one of the other characters tells them they need to "lighten up" or "cut loose". Our responsible character will start to worry that they are too boring and so will eventually get wild and spontaneous.

It's almost a given that they will go overboard and something akin to an inverse We Want Our Jerk Back! happens where the rest of the characters realise they do need some order and discipline in their lives, which the responsible one provided. They'll be back to being responsible by the end of the episode and they'll either reveal how much they hated being spontaneous or resolve to be a bit more fun without going overboard.

If it's the latter then expect this to be forgotten by the next episode. This will almost always happen to a female character but male examples aren't unheard of as well.