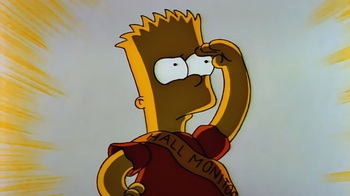 When the results of Bart's vocational survey suggest he'd make a great cop and Lisa learns her dreams of becoming a professional sax player are doomed by genetics (she has stubby fingers, which would make saxophone playing impossible, even though she doesn't exhibit any problems), their roles at Springfield Elementary are reversed: Bart becomes a hall monitor who cracks down on school misbehavior (after surviving a run-in with Snake during a police ride-along) while Lisa becomes a rebel who smokes with the bad kids, gets detention, and pulls off a teachers' edition textbook heist that could get her expelled.