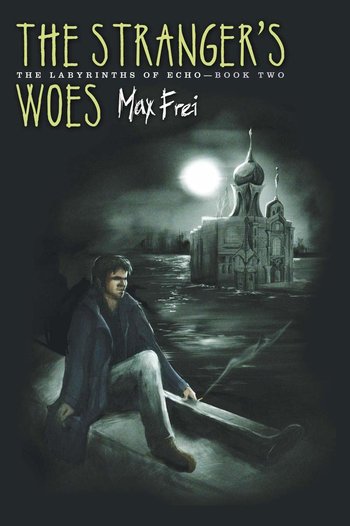 Labyrinths of Echo (original title: "Лабиринты Ехо"note In the series, "Ехо" (pronounced "YEH-kho") is the name of a city. Although it is customarily transliterated as "Echo", the Russian word for "echo", as in the sound effect, is "эхо" (pronounced "EH-kho").) is a Russian Urban Fantasy-slash-Magical Land series written between 1996 and 2003 by Svetlana Martynchik, better known by her pen name Max Frei. Extremely popular in Russia, it is in the process of being translated into English, with the first volume (The Stranger) published in 2009 by Overlook Press.

The series concerns Sir Max, a regular shmoe from our world, who is invited and subsequently transported to Another Dimension, one where magic and the miraculous are commonplace. It's not all flowers and butterflies there, however: some eighty years ago, a Great Offscreen War between numerous magical Orders nearly brought about The End of the World as We Know It by depleting the World's Heart, its sole source of magical energy. The catastrophe was narrowly averted and an ironclad Ban on Magic was enacted in the city of Echo, which stands atop the World's Heart. To enforce the ban, an elite regiment of Mage Killers was formed to hunt down any rogue mages and exiled Magisters of the disbanded Orders who return to Echo. As it turns out, Max was invited over because he has a rare capacity for True Magic, one which doesn't strain the World's Heart, as well as a number of nifty little talents that make him a great addition to said regiment, known as the "Lesser Secret Investigations Force" or simply "Secret Investigations".

Despite the dark premise, the series is quite humorous and lighthearted most of the time, resulting in severe Mood Whiplashes whenever the shit actually goes south.

In addition to the main series, two books were published starring Sir Max but with little connection to the core series. Both end with Reset Button, so it's left less than clear whether they are supposed to be parts of the continuity, dreams, Alternate Universe experiences, or samples of the stories from Mönin's notebook which nearly drove poor Max nuts. Given the nature of the setting and of Max himself, combinations of these answers can't be ruled out either.

After the final volume, the Labyrinths were continued by a Sequel Series, the Chronicles of Echo. It consists of prequels narrated by other characters after The Quiet City, but describing events at various times spanning from before the War of the Codex to after The Quiet City. This series is finished and currently contains 8 volumes, with the most recent one published in 2013.

In late 2014, Martynchik returned to the franchise with a new series, titled Dreams of Echo, currently at two volumes, telling of the Max' new adventures since his return from the Quiet City. While the franchise always had a major emphasis in the dreams and their worlds, this series concentrated on them specifically, each new adventure having something to do with the protagonist's and other people dreams and (sometimes) nightmares. It also significantly changes the interpersonal dynamics between many characters, reflecting their new status, maturity, or lack thereof.

Please add any character tropes to the series' characters list. For a complete list of the series' volumes, refer to Recap.Labyrinths Of Echo.

Or maybe she published his texts, they did meet some years ago after all.