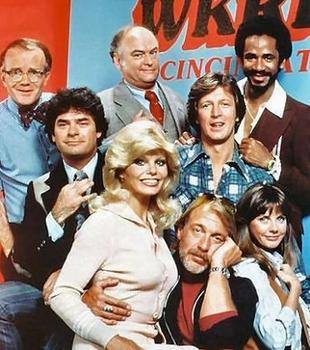 A classic 1978–82 Work Com on CBS that was originally an underdog property of MTM Productions, only to have the syndicated reruns catapult it back to recognition. It was as adult as possible on network television at the time, and frequently shifted tone from wacky to satirical to surreal.

In addition, it was often recognized by Real Life radio station employees as being an accurate depiction of the industry, thanks to series creator and executive producer Hugh Wilson's experience with it. Several of the more outrageous onscreen moments are actually the most realistic. As such, this show has been the general public impression of the commercial radio business for generations.

, a Muzak-esque concept actually popular at the time) has "catapulted" it to a permanent position at the very bottom of the ratings. After encountering the requisite cast of oddballs working at the station, Andy immediately — as in mid-song — throws out the old format and replaces it with Top 40 music, then hires an oddball or two of his own to add to the mix.

Among the ensemble were:

The show was originally envisioned as Values Dissonance in action — the "suits" vs. the "dungarees" (jeans) — with one of each group playing off a member of the other. Mr. Carlson and Andy were the all-but-powerless management (Andy not being able to get anyone to play the playlist, for instance); Herb and Venus were the flashily-dressed Casanovas; Les and Johnny were the nutcases (Johnny with his "phone police", Les with his masking-tape walls), and Jennifer and Bailey were the women. The "suits" vs. "dungarees" idea was used in a few early episodes (notably the turkey episode and "The Contest Nobody Could Win", where it's brought up by the characters), but quickly faded away in favour of a straight ensemble show.

Not surprisingly, the show was also a major early user of established hit rock music to illustrate — and often inform — the action. Unfortunately, the resultant expiration of license agreements has precluded keeping the original songs on current airings, and delayed publishing the series on DVD. The first season was released on DVD, but got around the music licensing by cutting out nearly all the music

, and removing scenes that were accompanied by music. However, in 2014 Shout! Factory announced

that they were releasing a box set of the complete original series—with almost all of the original music intact.

A revival show aired in syndication from 1991 to 1993; it was aptly titled The New WKRP in Cincinnati. Arthur, Herb and Les were still around, and Arthur Jr. (previously featured in the original series as a kid horribly twisted by military school) was now Herb's subordinate, with several other new characters joining up. Johnny Fever showed up from time to time as well (Venus and Jennifer appeared for one and two episodes each). Although it was turning a profit, the series wasn't successful enough to warrant a third season.