Series / The New WKRP in Cincinnati 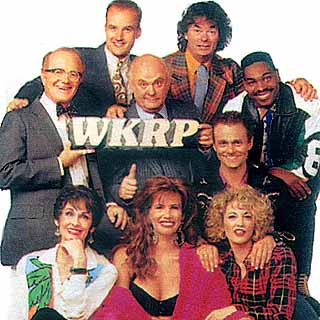 The New WKRP in Cincinnati is the sequel series to the classic '80s CBS Work Com WKRP in Cincinnati. Following a new group of co-workers in the radio station's office (along with some returning castmembers), The New WKRP picked up the plot threads left over from the original series and continued them in a new decade, as well as introducing new conflicts and situations to keep the station staff on their toes.

Arthur Carlson (Gordon Jump) is still the station manager of WKRP Cincinnati, and is still making the channel an unprofitable venture due to his indecisive, bumbling demeanor. After firing a program director for violating FCC regulations, he hires Donovan Aderhold (Mykelti Williamson), who works to make the content fresh and exciting again. To that end, he brings in several new employees, including new nighttime DJ Mona (Tawny Kitaen), in addition to maintaining current employees Herb Tarlek (Frank Bonner) and Les Nessman (Richard Sanders). Meanwhile, Carlson's son, Arthur Jr., is poised to take over the management of the station of when his father retires, and maintains an arrogant attitude towards the employees. From time to time, past employees from the series also return to lend a hand, including former WKRP receptionist Jennifer Marlowe and DJ Venus.

The second season retooled the plot, and jettisoned Arthur Jr. in favor of several new cast members, including DJ Razor (French Stewart) and returning character Dr. Johnny Fever (Howard Hesseman), who rejoined the station. The series ended with a cliffhanger where Donovan (returning from another city) was onboard a plane that crashed, with his fate left up in the air.

The series was notable for following up on details left unresolved from the previous series, and picking up with former main characters who had previously left the station. The series was cancelled at the end of its second season, not due to low ratings (as it did well in syndication) but to a lack of investors that were funding the show.