Parodic Table of the Elements 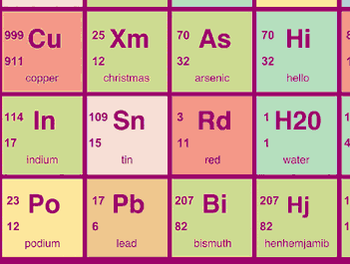 Not the Periodic Table you want...

Mrs. Krabappel: Who can tell me the atomic weight of bolognium?
Martin: Ooh! Delicious?
Mrs. Krabappel: Correct. I would also accept "snacktacular".
— The Simpsons
Advertisement:

The periodic table of the elements is one of those mysterious things that everyone sees in science class and almost nobody actually understands, so parodies of it are common. These generally break down into these categories:

For a similarly irreverent take on the classical elements, see Bizarro Elements.