Working with the Ex 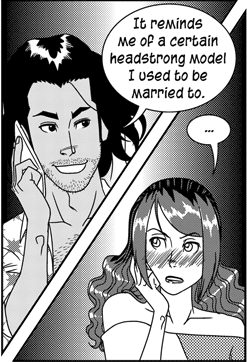 How to induce a Luminescent Blush in a badass.
Bina: Okay, listen, boys. We're all aware of the awkwardness of the situation here. It would be awkward enough if we just used to squad together, but the fact is that one of you used to be my husband, and the other one my, uh...cousin. Well, shit. Know what I'm saying?
(Beat)
Meyer (to Berko): You were the cousin, right?
— The Yiddish Policemen’s Union
Advertisement:

An easy way to introduce tension in the day-to-day life of a fictional character is to have them work with someone they were previously in a relationship with. While dealing with an ex-boyfriend, girlfriend, or spouse can often be awkward enough as it is, such encounters are normally uncommon and short-lived. When two characters with a romantic history end up working together, however, the tension is magnified by the fact that they have to see each other on a daily basis, with no easy means of escape.

If the relationship ended badly, this situation can lead to endless arguments and insults between the co-workers as barely repressed resentment bubbles to the surface. Their constant squabbling can lead onlookers to jokingly question whether or not they're still together, which will elicit horrified denials from the former lovers. When one of the characters reaches their emotional breaking point a "The Reason You Suck" Speech is not uncommon… and both sides have plenty of ammunition to use against the other. Things can be made even worse when one character receives a promotion and becomes the other's boss, putting them in a position where they can torment their Ex with impunity.

If instead there are still romantic feelings between the characters, their history can be a prime source of unresolved sexual tension. After all, they did have chemistry at some point in the past, and being forced to work in close proximity together can cause old feelings to be re-ignited… leading to the inevitable question of whether they'll get back together. This situation can be especially troublesome if one or both of the ex-lovers are currently in another relationship. If the current significant other finds out a character is working with an ex, jealousy and suspicion are almost certain to follow.

In some cases, a character is shown to work alongside their ex with little or no issues, possibly even using their familiarity to perform better together than they would otherwise. This is often the result of their previous relationship ending with a realization that they were Better as Friends and a common trait of Amicable Exes. In situations like this, light-hearted teasing about their past from the Ex is to be expected.