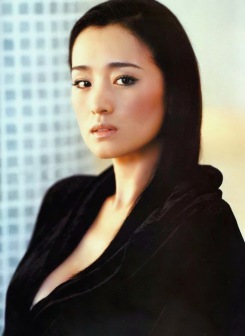 Gong Li (巩俐, born 31 December 1965 in Shenyang, China) is a Chinese actress (with Singaporean citizenship since 2008), one of the first to gain international fame since the founding of the People's Republic of China.
Advertisement:

Born in 1965, she entered the Beijing Central Academy of Drama in 1985, and while studying there, caught the attention of Zhang Yimou, who cast her in the lead role in his first film, Red Sorghum. She went on to star in Zhang's next five films, Ju Dou, Raise the Red Lantern, The Story Of Qiu Jiu, To Live and Shanghai Triad, and had a supporting role in Chen Kaige's Farewell My Concubine in 1993.

Her professional and personal relationship with Zhang became strained in the mid-1990s, and she began pursuing an international career, playing in such films as Chinese Box, Memoirs of a Geisha and Miami Vice. She has worked with Stephen Chow and co-starred in the 1993 Hong Kong Wuxia comedy Flirting Scholar.

She later collaborated again with both Chen (for The Emperor and the Assassin) and Zhang (for Curse of the Golden Flower), and in 2011 co-starred alongside Andy Lau in a Chinese remake of What Women Want.

Tropes applying to this actor's roles: