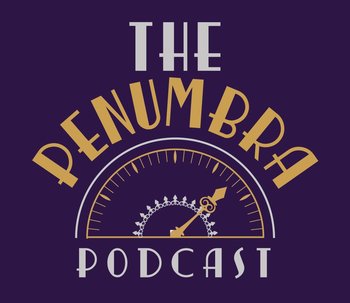 Depending on who you ask, the Penumbra is either the grandest hotel this side of Nowhere, a massive locomotive, or a twice-monthly podcast series. Each episode takes the form of a 30-50 minute radio play.

The Penumbra is all about stories you recognize told in ways you won’t expect. Your femme fatale might be an homme fatale; your swashbucklers might be specters. Your Detective might ‘manize as much as he womanizes, and your home might have just a little more heart than you're comfortable with. It’s never just a heist, a Western, an adventure. It's the parts we think are still fresh about those genres—mixed in with a little bit of our secret sauce.

And what's in that sauce, you ask? Well… see for yourself.

The Penumbra Podcast was started in 2016 by Sophie Takagi Kaner and Kevin Vibert. The music is by Ryan Vibert.

The Juno Steel story arc follows Juno Steel, a Private Eye working the streets of Hyperion City, Mars, and the interesting characters he meets on the job.

Second Citadel
Unlike the Juno Steel stories, the Second Citadel is a fantasy ensemble about knights and monsters.
Advertisement:
Shaken
One of the one-shot stories told before the podcast formatting changed, about an artist who fears she's inherited her mother's condition.
The Coyote of the Painted Plains
Another one-shot, this time about a schoolteacher and the bandit who kidnaps her.
Home
Another one-shot, about a family about to move out of a house with its own agenda.
"I'm so sorry you've been called away, dear traveler. We eagerly await your return"