You Talk Too Much 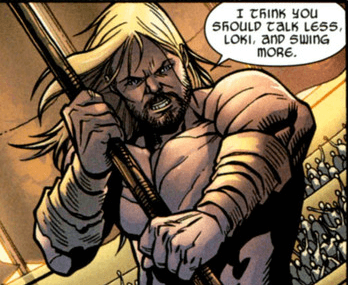 Verbal Kint: People say I talk too much.
Todd Hockney: Yeah, I was just about to tell you to shut up.
— The Usual Suspects
Advertisement:

A Stock Phrase said from a character who may often border on The Stoic (especially one who Hates Small Talk) to one who is rather chatty or Motor Mouthed. Typically delivered as a punchline to the end of a long spiel or complaint made by the latter character. Also occasionally used as a "Shut Up, Hannibal!"

A romantic variant has this line followed up by a "Shut Up" Kiss. If it's a battle, then they may express this by simply having them Talk to the Fist.