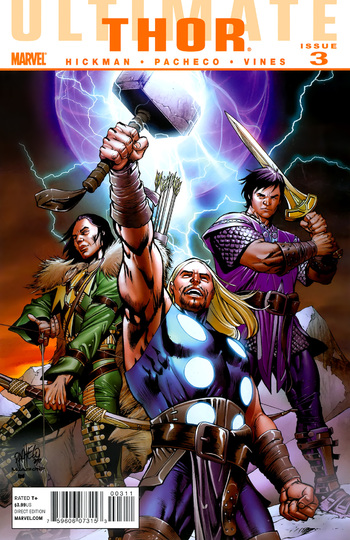 Ultimate Thor was a 2011 comic book miniseries by Jonathan Hickman and Carlos Pacheco. Set in the Ultimate Marvel universe, it is the ultimate adaptation of The Mighty Thor.

Once upon a time, Thor, Loki and Balder were a band of Bashbrothers, the proud sons of Odin. Loki betrayed them during WWII, and arranged that a Nazi military division (including tanks) was transported to Asgard, to lay siege to the city alonside the frost giants. The invaders destroyed the whole city, but not before Odin managed to punish Loki by trapping him inside the world tree, in the Room With No Doors.

Thor was reborn as a man in the modern day, and the European Super Soldier Initiative created weapons and power amplifiers that would allow him to fight as Thor. He is interned when he starts talking about himself as Thor, and Braddock tries to figure out if the weapons have some unexpected side effect, the man was nuts to begin with, or... is he the real deal? After some interviews with Dr. Donald Blake, he accepts to let Thor go free and be a hero. And just in time, because Hulk is attacking New York, and The Ultimates can not stop him.