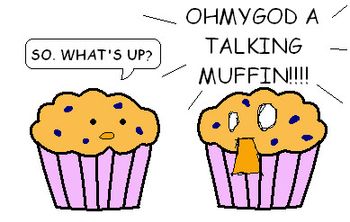 Calvin: You can talk?
Hobbes: Last time I checked, yes.
— Calvin and Hobbes: The Series, "Birth of a Friendship" (rewritten)
Advertisement:

The character stumbles upon a seemingly normal animal/inanimate object. Turning away from it, they hear a voice addressing them. Confused, they look around to see no one but the animal/object. When they finally realize it was the animal/object that spoke they freak out and exclaim their disbelief whilst stating the obvious.

Often coupled with: "Why didn't you say anything before?", which often gets a reply of "You Didn't Ask" or "I didn't have anything to say before". The animal/object may also be surprised that someone is able to understand them. May overlap with, and usually implies, It Can Think.

Corey asks this after he heard a tomato talk to him.

Corey asks this after he heard a tomato talk to him.