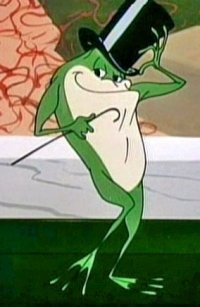 ♬ Hello, mah baby, hello mah honey,
Hello mah ragtime gal,
Send me a kiss by wire,
Baby, my heart's on fire!
If you refuse me, honey, you'll lose me
And you'll be left alone
Oh baby, telephone
and tell me I'm your owwwwwwwwwwn! ♬
Advertisement:

Referred to by Steven Spielberg as "the Citizen Kane of animated shorts", this 1955 Chuck Jones Merrie Melodies short featured none of the regular Warner Bros. stable, instead telling a standalone story about a construction worker who discovers a live frog inside the cornerstone of a building he's helping to demolish. To his amazement, the frog pulls out a little top hat and cane and starts to sing and dance. The construction worker naturally expects to strike it rich from his discovery. Unfortunately, the frog refuses to perform in front of anybody else. At the end, after becoming destitute and homeless, the man puts the frog into the cornerstone of a new building, and a flash forward reveals that a man of the future will soon suffer the same fate.

Told entirely without dialogue (not including the singing). The frog would later be named Michigan J. Frog, after the only original song from the short, "The Michigan Rag", and become the mascot for the WB network.

In 1995, Chuck Jones created a follow-up cartoon titled "Another Froggy Evening". It follows the frog throughout history meeting strangely familiar men who attempt (and fail) to exploit him for money.

"One Froggy Evening" provides examples of: