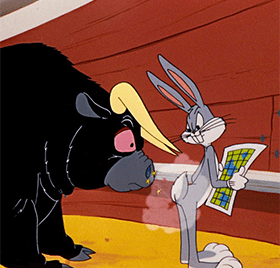 "Stop steaming up my tail! What're you trying to do, wrinkle it?!"
Advertisement:

The short begins with Bugs on his way to the Coachella Valley for the "Big carrot festival, therein." but takes a Wrong Turn at Albuquerque and winds up inside a bullfight arena, and becomes an unwitting victim of Toro the Bull and his horns. Bugs, indignant at this attack, immediately decides to turn the tables, taking up the role of a matador and giving the bull his just desserts for the rest of the cartoon. One of the few Bugs shorts where his opponent gains the upper hand at several points along the way.

This cartoon is also notable for a bit of history behind its making, at least according to Chuck Jones: Jones' supervisor, Eddie Selzer, barged into Jones' office one day and announced, completely out of the blue, that "bullfights aren't funny!" Since Jones and his fellow animators worked from the assumption that Eddie was always wrong about everything, their only choice was to make a cartoon about bullfighting.note In his autobiography, Jones joked that his one regret was not animating the bull with a pair of gigantic, pendulous (but anatomically correct) testicles. Jones' suspicions about Selzer's comedic sensibilities were, of course, correct - the short turned out to be, even today, one of Bugs' most successful and popular outings.

The cartoon, in fact, partially recycles the plot from a 1947 Daffy Duck cartoon, Mexican Joyride, directed by Arthur Davis.

It can be found on Looney Tunes Golden Collection Vol. 1.

"Bully for Bugs" provides examples of: